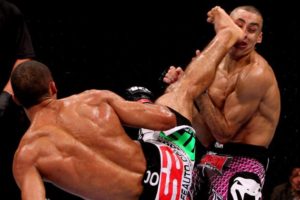 Mixed Martial Arts (MMA) is a hybrid martial arts that gained huge popularity after the Ultimate Fighting Championships (UFC) had its initial event on 12 November 1993. This event has become the proving ground for martial artist since this time and the sport of MMA began to gain popularity.

MMA had already existed around the world in many different formats and competitions that where similar to the UFC already existed. With this said it was the UFC that brought arts like Brazilian Jiu Jitsu (BJJ) to the forefront of martial arts.

MMA consists of a variety of martial arts combining in a complete art that can be utilised from all fighting ranges and positions. MMA uses the techniques of Boxing, Muay Thai, BJJ, Freestyle and Greco Roman Wrestling, Karate, Judo and multiple other martial arts.

Here at Ronin Academy we believe that the sport of MMA will be ever changing and are constantly updating our training to be at the forefront of the sport.

MMA training is an invite only because we believe to get the most out of the class for the students they need to have a basic understanding of some sort of grappling art and striking art, for example BJJ and Muay Thai. So if you have theses basic skills your more than welcome to try.

Come in and speak to one of our trainers and we can check your suitability.